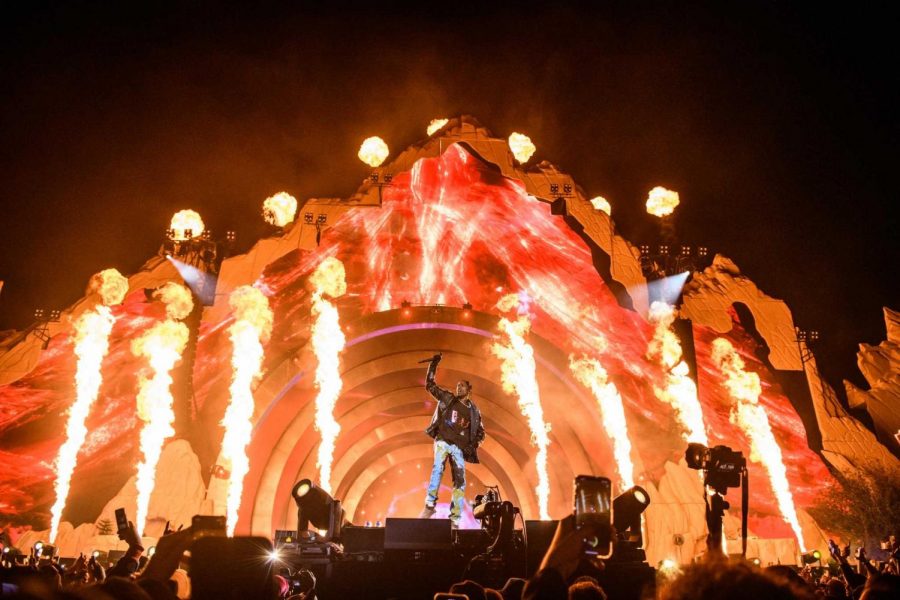 Travis Scott's performance at the Astroworld festival resulted in several casualties and many injuries.

The holiday months were a whirlwind of tragedy, excitement, and change. From mass deaths at concerts and parades to a new strand of Covid-19, November and December certainly upheld the chaos that has been the year 2021. Among these disasters, however, are bright stories of hope and holiday cheer– a reminder that, even in the most difficult times, humanity can create joy.

On November 5, musical artist Travis Scott performed at the Astroworld Music Festival, an event that ultimately resulted in the deaths of ten fans. A crowd surge was responsible for the deaths and the ensuing lawsuits, but many questions regarding how the event came to pass remain unanswered. The surge left multiple people unconscious and trampled in front of the stage, and Houston Fire Department logs show that the event was reported as a “Level One MCI”, or Mass Casualty Incident, a mere 52 minutes after Scott took the stage. An estimated amount of 300 people were treated for injuries at the concert and the ages of the deceased range from 9 to 27. Scott reached out to all of the families of the deceased, offering to finance their loved ones’ funerals, but several families declined, including that of the 9-year-old victim Ezra Blount. A criminal investigation spearheaded by the Houston police is currently focusing on the organizers of the event and Travis Scott himself.

Wisconsin residents were gathered in downtown Waukesha on November 21 to celebrate the city’s 58th annual Christmas parade when disaster struck. Less than an hour after the event’s start, a red SUV flew down the crowded streets where high school marching bands, dance troupes, and first responders participated in the parade. The car swerved towards citizens, killing five and injuring dozens more. Darrell Brooks Jr, the suspected attacker, was charged with a sixth count of intentional homicide a week later following the death of 8-year-old baseball player Jackson Sparks. Serving as a bright spot amidst the terror of the Christmas parade massacre, J. J. Watt, a member of the Arizona Cardinals’ football team, reached out to a teenager injured during the event. A Wisconsin native himself, Watts wished for 17-year-old Tyler Pudleiner to “get well soon” on Thanksgiving morning.

4 Oxford High School students were killed on November 30 in Michigan when Ethan Crumbley, age 15, fired a weapon on his peers. He and his parents have been charged with counts of manslaughter– voluntary and involuntary, respectively– while the school itself faces criticism for the event. Among those killed were 17-year-old Madisyn Baldwin, an artist, 16-year-old Tate Myre, a talented football player and academic, 14-year-old Hana St. Juliana, a dedicated basketball player, and 17-year-old Justin Shilling, an athlete and university scholarship recipient. An online petition is currently circulating, calling for the school’s football stadium to be renamed for Myre. As of December 3, the petition had over 200,000 signatures. This school shooting marks the 32nd such attack since the beginning of August.

The past two months were not only home to tragedy but also holiday spirit and miracles. In 2016, a Thanksgiving invite sent to the wrong number blossomed into a lifelong connection. Wanda Dench, intending to invite her grandson to dinner, sent a text to 17-year-old Jamal Hinton. Once the two sorted out the confusion, Jamal asked if he could still come to dinner, and Wanda said “Of course you can. That’s what grandmas do … feed everyone.” This year, Jamal and Wanda celebrated their 6th Thanksgiving together since that fateful text, showing how friendship can bloom between the most unlikely of people. In other news, a miracle took place in late December when 17 hostages who had been held captive in Haiti for two months escaped in time for the holidays. The escape occurred after the release of 5 of their compatriots in earlier months, and most of the hostages have been reunited with their families. Despite the happy news, the question of whether the ransoms– 1 million per captive– were ultimately paid is still unanswered.

2021 has been a year of challenges and disagreement, but Americans are ushering in the New Year with holiday cheer and hope. Although we can’t possibly predict what 2022 will bring, the trials and tribulations of the past year will undoubtedly help us navigate the coming obstacles.

The information above was collected from news sites including CNN, The Wall Street Journal, The New York Times, The Washington Post, and Fox News.